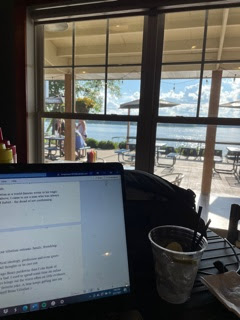 I'm pressed to argue with them or God.

This is a photo I took last weekend while writing at the end of a busy Sunday, first a newspaper column and then a column I'm sending to a Jesuit magazine about the Biden-Communion controversy.  The photo is taken at Powell's on the Lake, that being Big Round Lake, and in a building that housed the first Famous Dave's

Folks pull up in the boats to grab a bite and a drink and then head off to another spot or maybe home.

I've not travelled much so it's hard for me to compare but it's strikes me as being like a Cape Cod or Key West, the kind of atmosphere that is relaxed and all its own.

There's nothing better than writing when someone else brings the drinks to you, when you need inspiration you look at the clear water or into the blue sky pocked with perfectly white clouds.

I've decided that I'll spend part of at least one day a week on or near the water.

I'll cook at home Saturday nights with enough to eat for half the week.

I'll use local produce, find a source for eggs, buy a local quarter beef once a year, make my own bread and reduce my carbon foot print to the point of a petite ballerina.

Busy plans as a settle into my home, ideally my last plans.

Assuredly I will add frozen pizza and takeout and other less-natural sundries to my life.

I ain't a monk after all.

Peace and the occasional frozen pizza to you my brothers and sisters.