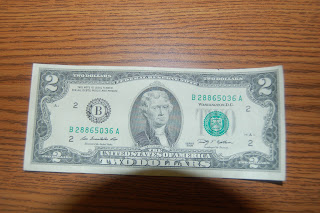 My longtime friend, reader and financial supporter from Bloomington sent a letter this week with sweet messages about my ascent out of the deep hole.

From the beginning, she sent me $27 in support each letter -- although I never figured out why the exact figure of $27.

This week, it was a $2 bill. Which is perfectly fine with me. I'm recovering financially and able to pay my bills, eat and have the occasional drink. By occasional, I mean nightly. My parents came of age in the 1950s, where the cocktail before dinner was de rigueur. I adopted their habits heartily.

She wrote that other entities need her help more -- and I agree. But I love she continued the $2 bill trend, only because I've saved everyone I've ever received. The other $25 has often been for healthy food and on a few occasions, some cocktails.

Bertha is happy for the transitions I've made and the stability that comes with it.

So she's taking that extra $25 and sending it to more needy causes.

I'm grateful for so many virtual friends who continue to reach out.

As unpleasant as the truthful and now years-long struggle has been, I remain cognizant of Miranda in Shakespeare's "The Tempest."

"How beauteous Mankind is. Oh brave new world/ that has such people in't."

Bertha is one of them.

Peace until Ukraine and peace and beauteous people unto all of you my brothers and sisters."

I must lift my head more.

Once, while working in Burlington, North Carolina, I developed a bad habit getting a 32-ounce Coke for breakfast at McDonald's every morning before work. Maybe one of the worst habits in my life. But it was too hot to get coffee so that became my caffeine to start the day. One morning I looked up and noticed the person working was a cute young woman. It wasn't a reaction of lust but one of aesthetics. Then I didn't lift my head for a while. One morning, I looked up to notice she was six or seven months pregnant.

At the time, I had been overwhelmed by work and no little depression. I was not being present, living in the world around me.

Again, I find myself working on that.

I lifted my head today to notice three weeks of August are gone in the year 2022. August in my 56th year. I will have fewer and few summers to say, "Next year." I don't plan on croaking soon but I realize I have fewer summers rather than endless seasons.

As noted previously, I've stuffed myself with tomatoes and sweet corn and melon. I go to the farmers market every Monday to enjoy the bounty.

Just this last week, I bought a grill because I find few greater joys than cooking out on a beautiful night. (Which can include 20 below nights in January when I pine for a charcoal fix.)

Not only will I grill full-on flesh from various critters, I do some tricks. Grilled salad, cauliflower steaks, cut peaches with brown sugar rubbed in -- a three-course dinner over coals.

And I will manage my time at work.

I recall going to journalism conferences where editors had a bidding war of who worked the most -- a dubious badge of honor. I once heard someone say they worked 100 hours a week. A quick bit of math indicated that was 17 hours a day, seven days a week -- check the math since I'm a journalist.

That's either someone with control issues or a bullshit claim. I support the latter judgment.

This occurred to me as I sat on the deck of Powell's on the Lake with my friend Tom and his young family Sunday. The sun warmed my face and my gin and tonic soothed my gizzard. "This is good," I noted to myself as the kids hurried about playing games.

In addition to the blog, I will start a journal at home, with pen and paper, noting my favorite parts of the day.

Then I will share it with you, my friends.

Peace unto Ukraine and peace and head lifting unto you my brothers and sisters.

My former company -- which, like Lord Voldemort, shall not be named -- tracked me down last week.

Not for a job or anything. Or a muddled apology. Or just a talk about our feelings and where our relationship stands now. Maybe we'd share a six pack. And Dan Fogelberg would write a song about it.

But it turns out it owes me money.

See, at some point after the company laid me off -- in a couple days I went from "valued colleague" to "synergy" -- they sent me a check.

Here's the thing, though: Since I was kicked out of my apartment at the newspaper, I had no permanent address.

This check for $1.900 (no small amount for me) attempted to follow me around on my sojourn, missing me at my first address here in Hayward, Wisconsin. The company that shall not be named hired another company to track me down.

Here's the thing about tracking me down -- it's not really that hard. You can Google "Rich Jackson" or better yet "Editor Rich Jackson." I admit to Googling myself, I hope not out of narcissism.

I have lived pretty publicly for a long time to the point where I don't expect much privacy. I don't even have blinds on my windows at home. (Neighbors have plastered the exterior of the windows with black crepe. I don't know what I've done to offend them.)

For the months after the layoff, I rambled about in cheap hotel rooms and a friend's cabin. The folks at the Postal Office in Bloomington, Indiana, told me I had to have a home address in order to get a P.O. Box. That didn't make sense to me until a friend noted I had sought a P.O. Box at the office next to a homeless encampment.

I appreciate the ethic the company seeks to pay me what I'm owed to the extent they hired another company to track me down.

I assure you, I will sock away the $1,900 for something important -- like when I want to buy a new grill. And some shiny beads and trinkets. And gin.

Thankfully, the company is paying promptly: sometime in January 2023.

To paraphrase the philosopher Carl Spackler, "So I got that going for me."

Peace unto Ukraine and peace as well as delayed pay unto all of you my brothers and sisters.

A Dan Fogelberg take on my situation:

And that's when I was sued.

It didn't recognize the corporate ID at firstBut then its eyes opened and flewIt went to hug me and it spilled its purseAnd we laughed until it sued.

The beer was empty and our tongues were tiredAnd running out of things to rueIt gave a subpoena to me as I got outAnd I watched as it readied to sue.

I had a beautiful dinner on the Chippewa Flowage with the Hartsough family Thursday night.

I ran into Katie Hartsough last Sunday at the Holiday gas station in Hayward. She didn't recognize me at first because I somehow went from being a six-foot-two dude with chiseled features to someone who now is mistaken for Danny DiVito. Or worse. Some people ask if I work as a troll under a bridge. "Answer me these questions three."

One of the weird things about living in Hayward, Wisconsin, is that I run into life-long friends haphazardly. Which is better than hazardly.

I noted on Facebook that Hayward for Wisconsinites is like a fallopian tube. Sooner or later, everyone passes through.

She invited me to have dinner with her family who yearly spend a week at the Tiger Musky resort on the Chippewa Flowage, which is similar to "Dirty Dancing" without Jennifer Grey, Patrick Swayze and abortion.

Life occurs at a slower pace and one has time to breathe, enjoy and drinking crapulous loads of cheap beer.

As I sipped on a can of Crapulent Lite, the sun sinking from hot to cool, we caught up after decades. I also talked to her mom, Maureen, and Katie's amazing sisters. Two of Katie's cool daughters showed up to eat the shadows of a hot day.

The vast dinner included grilled brats, salad, beans, guacamole, some bread nuggets and probably half dozen other thing I don't remember. They sent me away with enough food to feed a fat guy for days.

The evening is among the most relaxing I've had, given I worked every day for at least 40 days.

Maureen, the Hartsough mom, has done an amazing job raising beautiful human beings. Which made the evening even more beautiful.

In 1984, Katie was my prom date and we went as friends. Our entire group went as friends and we did the simple prom, making my mom's spaghetti recipe at Chris Melville's house and going to the dance. Katie noted it was a poor choice to make spaghetti when the women were wearing their best dresses.

Proving that boys are, and always will be, stupid.

I think we might have danced, but in my mind I simply do not remember any I've ever taken part of. I kind of dance like the monster in "Young Frankenstein." I am stiff and mostly incomprehensible.

After the dance we went to Jon Lancour's house where nothing happened other than young people being with each other.

And then I drove Katie home. Because we went as friends, there was no kiss. But she did grasp my arm and smile.

That was good enough. I'd like to think it was a sensual grasp.

There we were almost 40 years later catching up. It was really a beautiful evening with her and family.

Before we hugged on my departure, I apologized that the evening sun had made me moist.

We hugged and she whispered in my ear, "You're sticky too. It's like hugging a ball of uncooked bread dough."

She didn't say that. But it's funny so I include it in the story.

Peace unto Ukraine and peace and reconnections unto all of you.