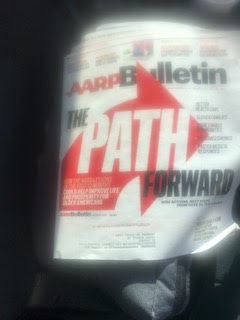 The Hogwarts of aging has tracked me down.

AARP somehow found me after nearly a year of not having a real address.

In addition to the technical homelessness and not having an address, I've struggled with re-entry because of the United States Post Office. Not knowing it was a mistake, I had my mail redirected to my work address. Then I was laid off and asked to leave.

I tired to get a PO box but was told that I had to have an address to sign up for a PO box, which didn't sense to me. (A friend later noted I applied for a PO Box at the post office next to a homeless encampment in Bloomington. Maybe that was it.)

The upside? And I always look for one.

I didn't get a bill for nine months.

It turns out the USPS won't redirect mail from a business to a private home. It would cause too many problems, I was told. The nice post office lady told me that I needed to contact those who send me mail to alert them to the change.

I've started to contact some of the magazine companies after re-subscribing and the Dollar Shave Club.

But I sure as hell didn't contact AARP, which has used an entire forest of paper products to recruit me since I turned 50 years old.

Perhaps I need to finally give in, much like Uncle Vernon in "Harry Potter."