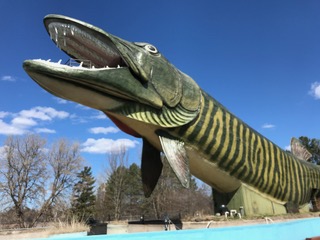 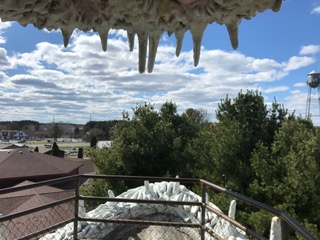 Just a day after finding out the kid was coming for a June visit, I had to check out local history.

The kid long ago became accustomed to stopping at every museum or historical marker on our drives around the eastern and northern states.

So Saturday, I went to the National Freshwater Fishing Hall of Fame a few blocks from my house to scope it out and serve as docent in a couple of weeks.

Full transparency here: I am not a fisherman. I've tried dozens of times but never took to it. (Please note I did not say I didn't get hooked. Just please note.)

But I found it fascinating, with some commercial Lake Superior reels dating back 150 years. I loved the history of the Rapala lures, the ancient first motors made for trolling and the myriad of trophy fish adorning the walls.

I also saw the the Corona portable on which Cal Johnson wrote so many musky and other fishing stories. (I won't get into the Johnson-Spray-Lawson controversy over the biggest musky -- this time.) For those who don't know me, I used to collect antique typewriters and will stop on a dime to peak at them. Sadly, I even dream about them.

And yes, I walked up the steps inside the biggest fiberglass musky in the world, all 146 feet of it. Even though my knees winced at every step.

It served as quite a view of Hayward and as a reminder of what Jonah went through. This fish did not spit me out, although it clearly disliked the taste of Bengay I brought with me. I'm sure the fish sought out the world's biggest shot of Jaegermeister to get the taste out of its mouth and if Jaeger tastes better than me, well that's saying something.

If you visit Hayward, make sure to stop. The fishing world -- particularly muskies here -- is a world unto its own and worth learning about.

Peace and trophy fish unto all of you my brothers and sisters.