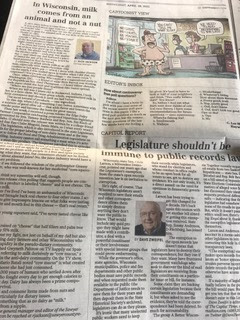 I take great pleasure in sharing space on our opinion page with two Wisconsin journalism icons.

For the record, I shall never achieve icon status. "I can't" status, yes. Icon status, no.

I first started seeing cartoonist Joe Heller's work in 1990 when I interned with the Eau Claire Leader-Telegram. In the pre-internet era, newspapers mailed copies to each other and I was amazed at a newspaper as small as the Green Bay Press-Gazette having such a great editorial cartoonist.

Since then, as I've moved around (just a bit) and I would hire Joe as a syndicated cartoonist and thus foisted his Wisconsin opinions in four other states. For the record, I've been looking at his cartoons for 30 years and I couldn't tell you his political leanings. That's a great cartoonist.

I didn't meet Dave Zweifel until about 1995 when I joined the state board of Associated Press Managing Editors and he became a mentor. Dave has fought tirelessly for decades for access to public records and meetings but along the way he became a friend.

At an APME meeting in 1999 in New Glarus, his birthplace, I made mention of the Wisconsin old-timer editors. "I think you're one of them now, Rich," he said. One of the greatest compliments of my lifetime.

I moved to Lansing, Michigan, the next year.

There has been good and bad to my travels as I look back.

But I'm so happy to be home and see that the old dogs have not given up on the good fight.

Peace and great journalism unto all of you my brothers and sisters.