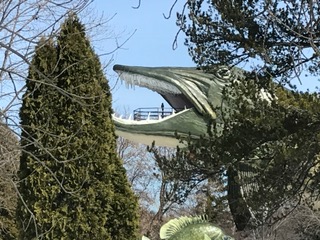 My new home city and I share something: We've both had to make a transition.

Hayward started in about 1878 when Eau Claire businessman Anthony Hayward made his way through snow and ice to look for a place to start a new lumber mill.

He found this area, with the Namekagon River and numerous lakes which could transport the lumber he wanted to cut.

For 40 years, hundreds of thousands of feet of lumber were cut from the region but then the mill he built burned down. And there was no reason to rebuild -- all the trees had been cut down.

So the region struggled for decades as there was little industry.

But an effort of local leaders saw a trickle of visitors coming from Chicago, Milwaukee, the Twin Cities to fish in the pristine water, especially for the largest prize -- the muskie. As a side note, among the most prominent visitors were mob guys from Chicago. Not only could they could escape the stench of Chicago summer before air-conditioning, they could unwind while fishing without cops looking for them and then have a decent steak at night.

Hayward is now a destination spot for those who enjoy nature. Now it's not just big fish but hunting in the fall, cross country skiing, hiking, snowmobiles and ATVs. If you want to be outside, this is the place to be.

It is home to the  National Fresh Water Fishing Hall of Fame and the famous six-story tall fiber glass muskie, which you can walk into and pretend you're Jonah.

Be careful, though, on whose side you take on the world's largest muskie. It's been known to cause bar fights. Louie Spray, Cal Johnson, Art Lawton. (Me? I'm a Spray guy with a 1949 catch that came in at 69 pounds, 11 ounces.)

Hayward is also home to the Lumberjack World Championship. I remember watching one of the early iterations on "Wide, Wide World of Sports" decades ago, proud my home state garnered the attention.

About 53 percent of the housing is second homes so in the summer, the local population will triple.

COVID even helped because city folks could work virtually and there's no better place to do that in a quiet city where social distancing is natural. In 2021, Sawyer County set a record for sales tax revenue -- exceeding the previous record by 10 percent.

The people are sincere, the food is wonderful and today -- with temperatures past 70 degrees -- I opened the windows in my office to catch the breeze.

Peace and a northwoods breeze unto all of you my brothers and sisters.