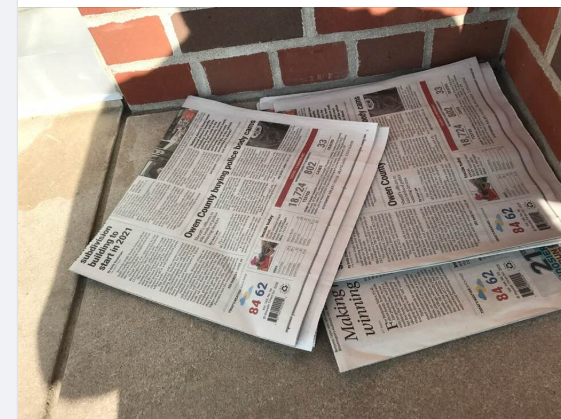 As  follow to Wednesday's post, I want to show you a photo I took earlier this week: These are well-read Herald-Times newspapers outside the Community Kitchen. That's where people suffering difficult times go for hot food.

Every time I've stopped there, I have seen people who are homeless or distressed or poor or elderly reading the Herald-Times.

And yet we have supposed community leaders who express their pride in not reading the best source of local news.

I've talked to plenty of well-to-do people who make six-figure salaries who refuse to take the newspaper and make it a point of pride. Deans and professors at Indiana University have said as much to me. One professor told me -- as he called to complain about a newspaper he doesn't read -- he was proud not to subscribe to the "little Hoosier shit-heel rag."

And yet the most distressed of us understand the import of local news, human connection, just plain-old knowing what's going on.

I recently talked with my dear friend Dennis over a beer about the destruction of Hotel 6. (Dennis is a contractor and carpenter and I'm always embarrassed to shake his hand, which is covered in the thick skin and callouses of a working man while my hand is as soft as a veal calf.)

"You're surprised?" he said. "The poor have never mattered and never will. Not to those who have something. Not to those in power."

Sadly, I knew he was right.

But the poor, in my experience, still read the newspaper when they get the chance.

They know knowledge is power.