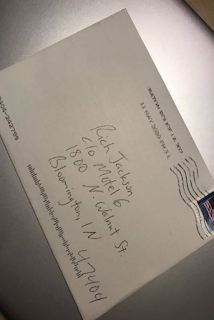 I get letters at Motel 6.

I feel like Sister in Eudora Welty's famous short story "Why I Live at the P.O."

At some point, I will write a short story about getting letters at the Motel 6. And that damned Stella Rondo, the cause of all of Sister's problems in "Why I Live at the P.O." because eventually Sister moves to the Post Office because of Stella Rondo's lies.

In one column that never made the page, I made reference to Welty about "Why I Live at the H-T," but the column stank to high heaven and my staff suggested I spike it -- newsroom jargon for killing the piece.

But I no longer live at the H-T. For a short time, I have lived at Motel 6 and received tidings of great joy. No gold, frankincense and myrrh. The letter I received was from Louisiana, a former journalist, supporting the idea of the blog and telling a story. A reporter sent me cheeseburgers from 5 Guys. I get six packs of beer. A local author dropped off books. I feel badly for the front desk, already hard-working folks who have to serve as my delivery people. That's in addition to them being hotel employees, caseworkers, social workers, problem solvers.

The thing is there's a fine line between someone with a fancy title like senior executive editor and getting mail at the Motel 6. I take all responsibility for that and no one should feel sorry for me. I have some money saved, I just need to stretch it.

I'm doing that with the help of friends and strangers.

Stella Ronda was a liar and made Sister's family believe her lies.

In my life, I am surrounded by angels.