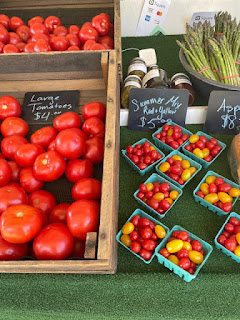 (A public letter to my friend Bertha in Bloomington, Indiana.)

I appreciate your nice note about the progress I've made in the last year. And indeed, I'm doing much better. I've lost about 25 pounds in that time and haven't had a gout attack in months. I had to give up beer in the process -- which is sad for a son of the Wisconsin Northwoods. Beer is as mother's milk to us.

As I've unpacked, I have been able to cook more and that's always a better way to eat. I sometimes joke that I recently found a building where one can go and buy uncooked foodstuffs which can then be taken home and made into lunches and dinners. It's called a grocery store. No one thinks that joke is funny.

So I was embarrassed to write the last time Bertha sent $27, I spent most of it on some drinks.

Today, I took Bertha's gift to a roadside veggie stand run by a couple of nice Mennonites. I bought some great tomatoes and local asparagus.

See, I am making better decisions as I improve after falling into that deep, deep hole.

It occurred to me today, while I meal-planned as I shopped, that I am no longer running. Running from pain. Running from difficulty. Hell, running from myself.

Thank you, dear Bertha, you're helping me during these last two years in the greatest travail of my life.

As you always ask, I will pray for your arthritis and I will ask readers to do the same.

Peace unto Ukraine and peace and friendship unto all of you my brothers and sisters.