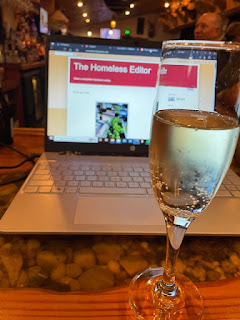 This odd journey over these last two years has brought me much joy, new friendships, a fair amount of free beer from friends and strangers. And certainly no little pain, all documented here in 333 posts.

Oh, what a strange trip it’s been.

I had not anticipated this as my last blog had 55 pageviews. I just needed something to do.

It’s not always been pleasant, as I promised myself to be truthful about the good and the bad and some of it has been more personal than I care to write publicly. I am, after all, a son of the Wisconsin Northwoods. We’re only allotted two to four feelings per guy. That’s a weight-based allotment.

Some of it has been downright painful for me. Describing various bouts of deep clinical depression – a condition I’ve dealt with for 25 years – was as painful as any writing I’ve ever done. I completed those entries, at least satisfied by the truth of it.

Even as I gained employment and a place to live, I kept writing and then as fate would have it, I became displaced again. And then had to find a permanent address.

And as long as I have readership, I continued to write.  When I was in Fourth Grade, the teacher was asking students what they wanted to be when they grew up. I said wanted to be a writer. “Mr. Jackson, no one will pay to read what you write,” said the teacher at the Catholic grade school.

That turned out to be wrong as I’ve been a professional journalist for 30 years this month. And while I don’t get paid to write this blog, I will continue to write – or at least type – while there are folks patient with my typos. (I usually write and edit the blog while I have a couple of drinks at the end of the day. Go figure.)

The friends and connections I've made warm my heart (I'm thinking of you, Bertha). The criticism, I slough off given I was first criticized in a newspaper in high school -- 40 years ago.

And you know what? I'm going to keep going.

It's been an exercise in being publicly truthful about bad circumstances and I now see more light at the end of the tunnel. There's always been light but sometimes it's been a pin prick as viewed through a pinhole camera.

Thank you, dear readers for joining me on my journey.

Peace unto the Ukraine and peace and thanks unto you my brothers and sisters.