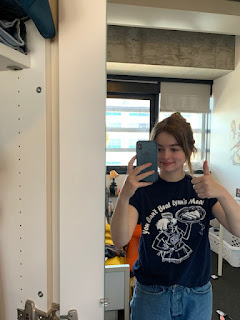 Here's Kid in Hollywood last week. Her internship job that day was to deliver 15-20 scripts for various production agencies around town.

For this task she wore a famous T-shirt from here in Hayward, Wisconsin. It's from Lynn's Custom Meats. The shirt reads, "You can't beat Lynn's meat."

In the words of Larry the Cable Guy, "That's some funny stuff right there."

I just found out today that one of her bosses exhorted her to get a script on to someone's doorstep despite some impediments include a closed gate. Kid studied the situation, climbed the fence and delivered the script to the doorstep as requested. Then climbed her way out.

I'm incredibly proud of her.

She's the smartest person I know, she's kind and open-minded and, obviously, funny.

It's helluva thing bringing someone into this world and that little blob of humanity turns into something like Kid.

I've written before and I'll write again, when I was a young man, I thought I had something great in me.

It turned out to be Kid.

Peace unto the Ukraine and peace and spectacular children unto you my brothers and sisters.