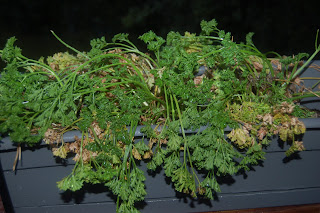 My parsley is dying.

It could be treated as a metaphor to go along with summer.

"As the season of summer passes, so do the greens of summer."

For most of college, I worked toward a second degree in philosophy with a specialty in logic. My logic mentor, Dr. Richard Behling, was a logical positivist but said he wasn't because the school was regularly derided as self-refuting. Logical positivists, or so said Karl Popper in 1933, would not discuss anything that couldn't be proven logically or scientifically -- an idea that couldn't be proven, you guessed it, logically or scientifically.

Growing outside on my deck, it shall pass. This, too, could be said of me, of all of us.

I would remiss, though, to fail writing about growing parsley this year in my newest home. Among my crop was rosemary, basil, thyme, oregano and parsley -- plus a basket of salad greens and a tomato plant. (The latter of which, in a pot, produced tomatoes with less flavor than the supermarket tomato in January. I fed them to the Byrds -- not birds but the seminal rock band of the 1960s.)

Parsley was a throwaway but it ended up being the star of the summer.

Fresh parsley was so wonderful, I couldn't pass it any time of day without pinching a sprig and chewing on it -- including at 8 a.m. on my way to work. I started plucking and chopping parsley finely for a simple breakfast of parsley scrambled eggs and toast.

And it is dying as it will and should.

I didn't use enough of my herbs this summer but it was a wonderful start to creating a home after several years of tumult.

Next summer will be better as I am at home.

Peace unto Ukraine and peace and parsley unto you my brothers and sisters.