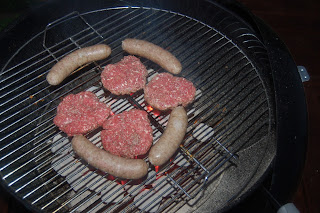 For those of you who know me, grilling is my preferred milieu.
To paraphrase the description of the Old Man in "A Christmas Story," where other artists work in oils and pastel, I work in grilling.
And I have added a grill to my home.
Yes, studies have suggested charred food might involve carcinogens but what doesn't? So does bacon, which supposedly has the same issue. But bacon has never harmed me, only loved me. Were someone to invent a bacon comforter, I would buy it. (Note to self: Invent bacon comforter.)
But if something is cooked over coals, I'll eat it. And I'll cook it.
The photo I'm running with this post is the mundane: burgers and brats.
That will be lunches and dinners for half a week with the occasional vegetable acknowledged in a friendly manner. Sauerkraut is a vegetable, obviously.
But I can and will grill a three-course meal.
We'd start out with a grilled salad. I cut a head of romaine length-wise, brush it with olive oil and then salt and pepper. Put on the grill cut-side down for three minutes and then turn. Put crumbled blue cheese and cooked bacon on and cook another two minutes. Pull and dress the grilled salad with homemade balsamic syrup (Take a cup of balsamic vinegar and three tablespoons of brown sugar, cooked down to a cup again).
The main will be a whole chicken, drizzled with lemon juice. Then throw the lemon husks into the cavity of the chicken along with fresh rosemary. Twenty minutes before the chicken is ready to go, throw rosemary sprigs on to the coals to give the chicken a smokey rosemary taste.
Finally, cut peaches in half and rub brown sugar on to the cut side. Grill that for two to three minutes and turn over for another two minutes. Serve with ice cream.
It's also insanely easy to grill a pizza at home.
Or just about anything.
So now I have a grill and that adds to making my place more of a home for me.
Peace unto Ukraine and peace and charred foods unto you my brothers and sisters.
Posted by _____ at 5:19 PM