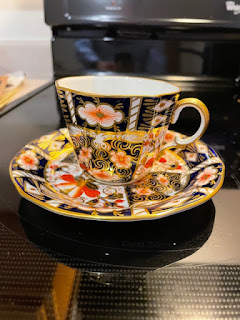 I want to tell you a story about a tea set.

In 1921, my mom's mother -- Grams as we called her -- was getting married in tiny Gravelbourg, Saskatchewan. The town was a stop on the Canadian National Railway, a settlement named after a priest who had asked his fellow Canadians to settle the plains of the province, make their homes there and build settlements of French culture.

A tradition in the budding town was, when a young was engaged, everyone would throw in 50 cents or a dollar so the bride-to-be would have a proper tea set. After all, Canada remained a part of the United Kingdom for the most part -- except for Quebec.

A proper tea set was fundamental to a marriage, more so than a crock pot in the 1970s or an Instantpot today.

Most brides, I imagine, bought cheap but full tea sets with the entire cadre of parts -- and I don't know what that entails but certainly includes a tea pot, a sugar bowl and creamer,  tea cups and tea cup saucers, et al. Also some small plates for sweets and sandwiches that ought to accompany the tea along with a decent marmalade. I remember my mom stocking up on tea and marmalade for Grams' visits, foreign items for a Wisconsin kid in the 1970s.

But Grams apparently had taste.

She ordered a smaller set of Crown Royal Derby (pronounced "darby") -- the tea set of the English Royals.

The tea pot and it's stand were knockoffs and beyond the cups and saucers, there was no additional accoutrement.

My mom brought the tea set home when Grams died in the 1980s -- I am not the family genealogist -- and it sat in our china cabinet for a couple of decades.

Later, as I traveled, I took an interest in loose leaf tea and started breaking out the set when I would return home, taking extra care when washing. I couldn't imagine my mother's horror should I break something.

I raised my budding and brilliant kid on drinking tea, at first herbal and then caffeinated when she became a teenager. My mom loved having intergenerational tea. Her mother's tea set, herself, her son and her granddaughter. And, oh, we always brought some Pim's Biscuit Cookies, crisp shortbreads covered with a thin layer of either chocolate or jam.

So the deal was I would get the Canadian family tea set, so it can continue on to a fourth generation, my kid.

When I was laid off from the Bloomington Herald-Times, all of my stuff was in storage but I insisted on having two boxes containing the tea set with me and asked colleague Laura Lane to hold on to it for me. She brought the boxes in her visit a couple weeks ago.

One hundred years later, the set remains as beautiful as it ever was.

When I make drink tea in the cups -- they might be historic but all of the history comes not from the worth but from the history -- I think of generations.

Peace and tea unto all of you my brothers and sisters.