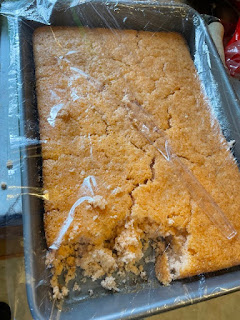 This is the easiest thing I've ever cooked.
I call it Orange Crush cake but it could be called anything.
Per instructions from the ever-wise internet, I took a box of vanilla cake mix and poured it into a bowl. Then I added one can of Orange Crush. No eggs, no oil, no water. I followed baking instructions and voila -- Orange Crush cake.
I didn't eat much myself as sugar kills my gout. But it was fun to make and I enjoyed cooking for others so friends received decent portions.
My mom was the kind of mother who cooked to please and given she had four boys, that wasn't difficult. It was like cooking for pigs at the trough. The dinner bell went out (literally a dinner bell) and we sloughed to the trough.
And it was wonderful. I spent decades trying to coerce recipes from her but there were none. A handful of this, a pound of that, a quick pour and then a touch of herbs. (In our house, because of dad's touchy stomach, herbs were sparse. Mom didn't even use salt or pepper. When I discovered such exotic spices, my world opened up.)
Cooking is homage to my mother, who fed four boys on little money and full guts. I didn't understand the phrase "Jewish mama," but that's who she was.
That's why I try to cook, not just for me but others. It's a warming feeling to feed other people who appreciate what I've wrought.
Peace unto Ukraine and peace and full stomachs unto my brothers and sisters.
Posted by _____ at 4:28 PM