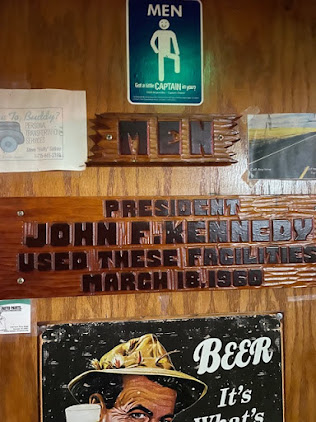 My VisionQuest as a amateur student of history was met Saturday during Jackpine Savage Days in Spooner when I found a bar that commemorated JFK urinating in the joint.

Oh, dear reader, I apologize for all the questions you might have right now.

So I don't bury the lede (journalism jargon for the first paragraph) while John F. Kennedy toured northwest Wisconsin in the 1960 primary, he stopped everywhere. My dad shook his hand twice while Kennedy walked up and down Bridge Street in Chippewa Falls. His driver was my dad's friend Pete Dugal of Cadott.

And when Kennedy made it to Spooner, he had to go.

I don't know when the sign went up on the men's room door but there should be a historical marker outside. JFK peed here. And it turns out I do a really killer impression of Kennedy saying, "I, um, uh, ur, rathuh have to go." Hearing it is worth the admission price.

If you look it up, the jackpine savage online is invariably a man, someone who can live for a long while in the woods, on his own and and without commiseration.

When I worked in Wisconsin Rapids, we found many jackpine savages who lived in Adams and Juneau counties but inevitably they were on the cusp of mental health issues. If you drove past a compound where someone lived in an old school bus, had a pillbox made of sandbags and flying an upside-down flag signifying distress, that was going to be a jackpine savage.

Also, do not turn around in their driveways. Because sure as hell, you're were going to be in the crosshairs of a 12-gauge.

But I love my home state where a bar marks the momentous pee of a political candidate.

Peace and pees unto you my brothers and sisters.