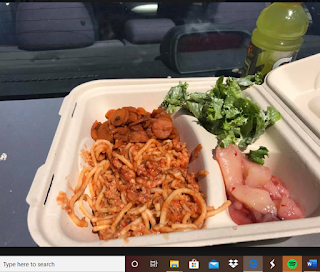 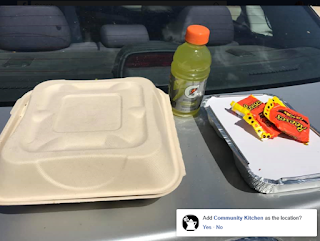 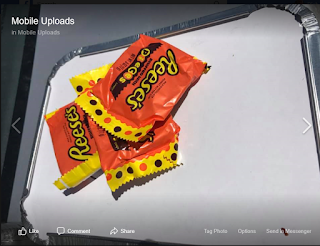 All of that with a side of dignity and respect.

Courtesy of Community Kitchen of Monroe County, which makes about 1,000 meals a day for people in the community, no questions asked.

On Thursday, I talked to Vicki Pierce, executive director of the Kitchen and its operations which in 2019 prepared  314,911 meal for various program throughout the community, including at its main serving spot at 1515 S. Rogers St. in Bloomington.

She said the Kitchen started humbly during a particularly harsh winter of 1983, with a committee literally called, "Get Through the Winter Committee."

And what started as two meals a day is now six meals a week in addition to other programs where Community Kitchen partners with other non-profit agencies.

The kitchen staff prepares all of the dinners from scratch given what they have on hand. Because it's now a big operation, the staff can plan throughout the week and further. The planning includes ensuring a range of menus so no one, cooks or clients, gets bored.

A more significant factor is calories, Pierce said. Given so many of the clients live on the streets, they need as much energy as they can get. In addition to a traditional meat-based entre -- although vegetarian options are available -- the cooks make sure to have pasta, beans, rice and potatoes. Finally, there's typically a green salad, a vegetable side and some kind of fruit to balance out a meal. The client can also get a cold meal that can be eater later or the next day. Often, clients are offered water or some other drink and maybe some candy or chips.

The Kitchen runs on donations of food, money and volunteers to do the work with some paid staff as oversight.

Pierce said the Kitchen usually gets a good amount of meat from the county fair, a couple of steers and eight or nine hogs -- but that's not going to happen this year with no fair.

She said those who want to give ought to use whatever mechanism is best for them, whether that is money or good. A new trend she's noticed is people ordering from Amazon and having it shipped. Just Thursday, the Kitchen received granulated garlic, Italian season and Chef Boyardee in the mail,

As yet, kitchen staff has not noticed an uptick in need because of COVID-19 and the ensuing economic crisis. She said in 2008, the need dragged the crisis by about six months until unemployment and other short-term solutions ran out but then extended years beyond, just decreasing in the last few years.

What I personally have found amazing -- the food is utterly delicious. This is not some glop like you might see in movies or "The Simpsons." The menu is as good as a restaurant and the cooking involves actual flavors -- take the balsamic-glazed carrots in Thursday's menu. That's Bloomington's Community Kitchen.

Best of all are the friendly faces serving clients. I've never been greeted by anything less than a smile with plenty of dignity and respect, despite the real stress of having to serve 1,000 people a day.

Pierce said the clients are part of that. Despite their distressed circumstances, they know the blessing of the kitchen and appreciate it. She said they only have to call police one or twice a year and that's only after someone has created a commotion and refused to leave. Patrons often are the first people to calm any tense situation.

The Kitchen has been helping with the Hotel for Homeless program as well as kid's programs, where she is pleased they can offer food the children might not have been introduced to, brussel sprouts and fresh mango for instance. It's not just sustenance in those cases but education.

Please check out its website https://www.bloomingtonvolunteernetwork.org/agency/detail/?agency_id=59868 for ways to give.